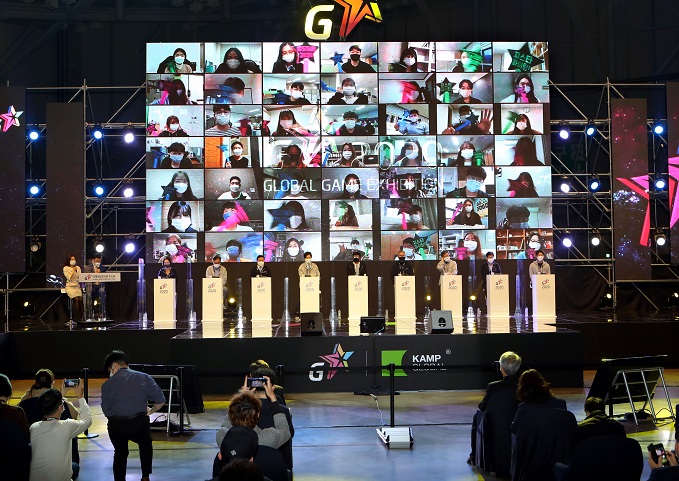 Gamers congratulate the opening of G-Star 2020 during a ceremony at a convention center in Busan on Nov. 19, 2020. The four-day global games expo went online this year due to the COVID-19 pandemic. (Yonhap)

SEOUL, Feb. 15 (Korea Bizwire) — South Korean game developers are facing a crisis as their newest games are underperforming, failing to produce a clear blueprint to turn the blockchain industry into a new source of profit.

The fourth-quarter operating profits of Krafton Inc., the gaming giant behind the global smash hit “PlayerUnknown’s Battlegrounds,” fell short of the market consensus by more than 80 percent.

“Traditional game makers are expected to face a temporary downturn as the recent transition into a new profit model is undermining the sustainability of current paid games,” said Jung Yong-jae, a researcher at Mirae Asset Securities.

Developers, in particular, are failing to overcome the controversy of exorbitant charges for probabilistic items, blindly pursuing the new blockchain industry.

In the meantime, the blockchain industry is already becoming a ‘red ocean’ industry.

The competition over initial coin offering (ICOs) last year, for instance, brought game developers to establish the so-called ‘token economy’ centering games, the metaverse and non-fungible tokens (NFTs), and turn it into a platform business.

Platform businesses, however, are notorious for their winner-take-all environment in which losers will see their coins turn into ‘garbage’.